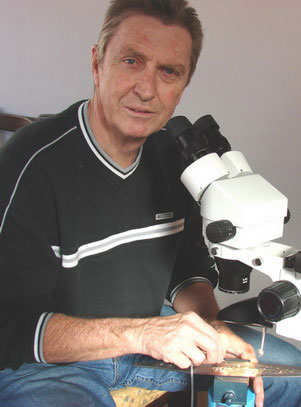 South African knifemaker Neels Roos lives in Cape Town. Prior to his retirement, he worked as a surveyor for gold mines.
In 2004, he built his first belt grinder and began to teach himself knifemaking off the internet. By 2005, he had joined the Cape Knife Club, where he was Secretary for two years.
He was driven to create one-of-a-kind art knives and decided to add engraving to his arsenal of skills. In 2009, he imported engraving equiptment and again strove to perfect his skills with the help of the internet.
In July 2008, he and Fannie la Grange formed the Cape Knifemakers Guild, where he continues to be the secretary.
Roos joined the Knifemakers Guild of Southern Africa in January of 2012.

I was really excited when the folks over at ChefSteps (www.ChefSteps.com) told me about their favorite kitchen shears. Their recommendations are always pretty spot on. (If you don't know about ChefSteps, go over and check them out!)
MAC's forged kitchen shears really get the shop done. They will make quick work out of hard shellfish shells, poultry bones, fish bones, and miscellaneous packaging. One blade is micro-serrated for holding onto slippery surfaces while the other has a razor-polished edge that slices cleanly through tough shells and bones. The drop-forged stainless steel blades are some of the strongest we could find. They are held together by an adjustable nut with a quick-release joint so that you can maintain tight blade-to-blade contact and yet be easily taken apart for cleaning (very important in a kitchen shear!). Strong enough to cut through a penny, these shears were designed for heavy-duty kitchen tasks. Slightly right-handed handle but we know some lefties who use them too. These sharp and smooth functioning shears feature a blue textured/rubber grip.
Made in Japan.