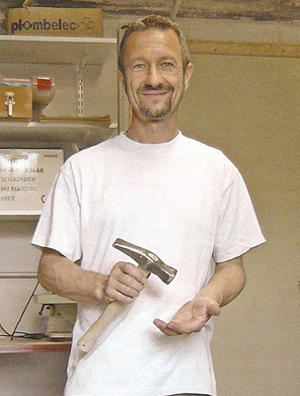 I was introduced to Guy Poggetti at the 2019 Blade Show by Mastersmith Adam DesRosiers. Immediately, when I saw Poggetti’s work, I had to see if we could offer his masterpieces through BladeGallery.
Guy Poggetti, born in 1963, lives in Marseille France. He lives with his wife and two children in a house that was purchased in 1920 by his great, great grandfather. He studied mechanical engineering, and though he has never worked in the field, the skills earned from study have transferred well to his knifemaking.
In 2001, he encounted handmade knives while travelling in Corsica. He was immedately hooked. He was fascinated that from the same bar of steel, so many different styles of blade, ranging from mirror polished to dark grey, could be made. He immediatley bought a bar of steel (that same steel, XC75 carbon steel remains one of his favorite steels today) and used it to create his first knife.
He continued to practice, making stock removal knives. Through forums, he developed friendships with knifemakers such as Gregory Delauney, Daniel Cerbera, and Jean Marc Lucchesi, who were tremendously helpful in sharing their knowledge.
In 2003, he built his first coal forge, though he moved to a gas forge by 2007. He continued to work late each night after completing his day job, perfecting his bladesmithing skills. In 2012, he made the leap and became a full time knifemaker.
Over the years, he has developed his own unique and identifiable style. It is very rare to find a maker that is a highly skilled bladesmith and capable of making high performing modern flippers. Poggetti gains great pleasure in forging and finds inspiration in creating damascus. He often explains that though his collectors enjoy his damascus, they can’t enjoy it as much as he did in making it.