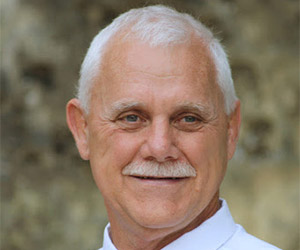 Lourens Prinsloo made his first knife in 1992, shortly after attending a knifemaking course with Owen Wood. He became of member of the Knifemakers’ Guild of Southern Africa only two years later, in 1998.

Prior to his retirement in 2016, Lourens taught engineering, graphic design, woodwork, and metalwork. These combined skills assisted him greatly with the diverse challenges encountered creating his knives.

His main focus is on making gentleman’s folding knives – especially liner locks. Prinsloo uses a variety of steels including his own trademark mosaic damascus, which he forges himself at his home in Pietermaritzburg, South Africa. Lourens developed his unique mosaic damascus after becoming friends with renowned US bladesmith Cliff Parker. Lourens has won numberous awards over they years for his mosaic damascus, including Best Gentleman’s Folder, Best Art Folder, Points of Interest, and Finest Own Damascus. Lourens regularly attends the Durban Easter Knife Show, the Knifemakers’ Guild of Southern Africa Show, FXI (Paris), and NYCKS.