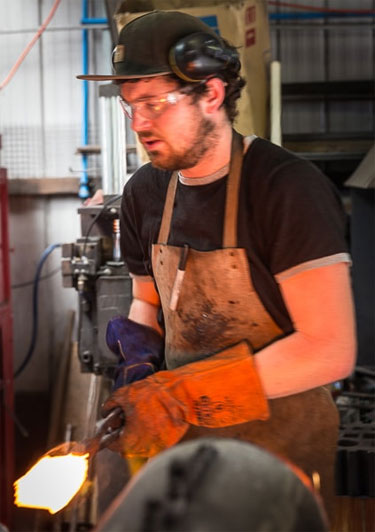 A knife maker since 2008, Jackson Rumble makes custom knives and teaches knifemaking classes at Tharwa Valley Forge. Rumble hails from Canberra, the capital city of Australia. He aspires to constantly push his creative limits and grow as an artist. Rumble gained his ABS Journeyman Smith accreditation in June 2019. Along with his JS, Rumble received the prestigeous Joe Keeslar Award for Best Journeyman Smith Knife.
Jackson's personal blade brand, Phoenix Knives, reflects his extensive use of recycled and repurposed timber and metal. He often works with materials from old buildings, street trees, and obsolete machinery imbuing his creations with a history of their own.
Asides from being asthetically pleasing, Jackson loves working with woods because it is always alive and moving; many people don't appreciate the fact that timber is always moving in response to its surroundings. This fact, combined with its fascinating mechanical properties, makes Jackson feel that wood provides an excellent challenge to his creative abilities. In addition to exotic woods, Rumble enjoys working in damascus because its nature complements the natural figure and characteristics of the woods that he loves.
Jackson spends most Australian winters in the United States where he runs a summer camp for teenagers.