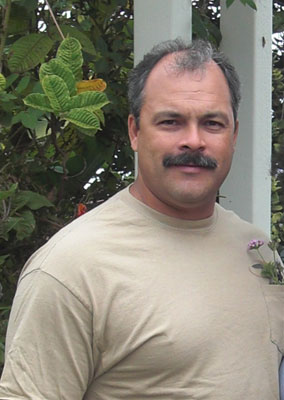 An avid hunter, Mastersmith Aaron was never able to find the perfect skinning knife. However, despite a lifetime of working with knives it wasn’t until 2003, when he lived in Florida, that he visited Cliff Parker's shop in Zephyrhills. He was so impressed with Cliff’s picture mosaic damascus that he was inspired to begin making his own knives.

In 2003, Aaron attended the Knifemakers Guild Show in Orlando, FL. and met fellow maker Corbin Newcomb, who generously invited Aaron to spend a week at his shop in MO, learning to make knives. He jumped at the offer, of course, and found Corbin to be very generous with his knowledge of damascus and forging. Aaron says, “It was a great learning experience and very memorable.”

At the end of 2003 Aaron moved to Redding, CA, where he lives and works today. He built many of his own tools including an air hammer and hydraulic press – all to facilitate creating knives. He considers sole authorship a point of pride – he forges all his own blades, makes all his own damascus and does all his own leather work. He was awarded the title of Journeyman Smith in 2009 and became a Mastersmith in 2013. Attending a class on making folders taught by Mike Vagnino in 2001 brought to life a new aspect of knife-making.

Aaron prefers to use natural materials – his knives are truly one-of-a-kind. He uses the best techniques available for heat-treating – including triple tempering and triple quenching. He hopes that his knives will feel like a natural part of the new owner’s hand, and does all his making with the expectation that the knife will be passed down from generation to generation. Aaron has been a full-time maker since July 2012.